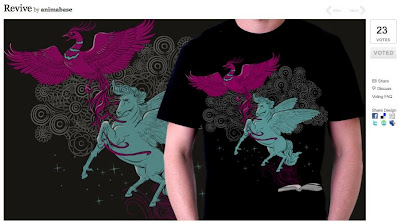 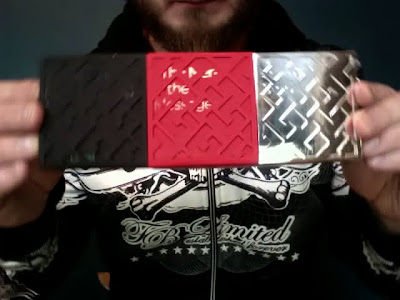 ABOVE: the GRISTLEISM Soundboxes, 3 color set, in original 2-layered packaging

we received our GRISTLEISM recently, directly from Staalplaat in Berlin. the shipping time was supa fast + we were hella exxxcited to break open the boxes! 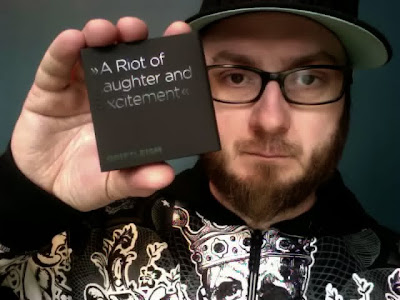 ABOVE: the Black GRISTLEISM Soundbox packaging with ">>A Riot of Laughter and Excitement<<" inscription

GRISTLEISM features 13 Loops of audio created by Throbbing Gristle. the Soundboxes themselves come in 3 colors, Black, Chrome + Red. the Soundboxes feature a Volume Control (which is also the on/off switch), a button for switching between loops + a dial for Pitch Control. 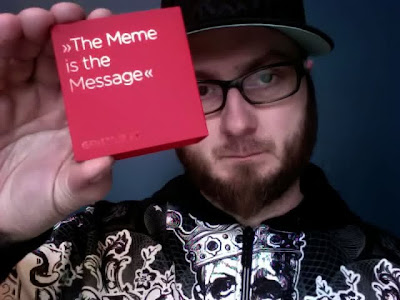 ABOVE: the Red GRISTLEISM Soundbox packaging with ">>The Meme is the Message<<" inscription

01 distinguishing feature, which differentiates
GRISTLEISM from the FM3's Buddha Machine, is that
GRISTLEISM has no audio output other than the built in speaker. without a headphone jack Throbbing Gristle takes a hardcore position with
GRISTLEISM that is a parallel commitment to low-fi industrial noise, i.e. that you must listen to
GRISTLEISM only through the built-in speakers or by mic'ing the soundboxes. 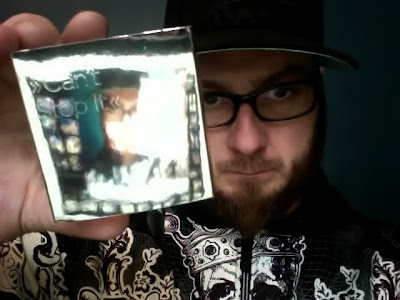 ABOVE: the Chrome GRISTLEISM Soundbox packaging with recursive feedbaxxx possibilities

we intend to perform our Southbridge Slow Electronics set on glitch.fm tomorrow using the GRISTLEISM soundboxes + have been experimenting today with mic'ing them in various forms such as this: 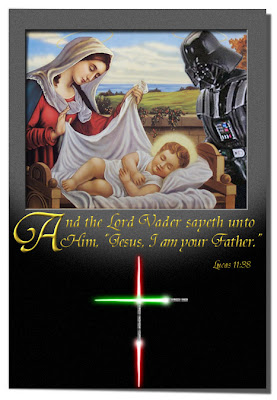 
Brought closer to the notion of resistance, that of adherence seems to function as an antonym: to resist something is to not adhere to it. On the other hand, to resist, despite what might claim some inventors of "nonistes", is also to adhere to something else. Between the two, the level of adherence can serve to measure the degree of resistance against institutionalization or cooptation. Adherence can be resistance's weapon just as it can be its weakness point.

As such, resistance and adherence go hand in hand.

However their opposition is not a given. Indeed, the notion of resistance_adherence can be seen rather as a process (of everyday life), a way of doing, of work to be done at every level (at all times). The choice of the concept of adherence, rather than that of adhesion (membership), brings forth the possibility of approaching that concept in terms of degree, of coefficient -- that is, as measure -- and not as identity. Adherence hence suggests the ideas of a slippery ground, of a force of attraction, of friction, lubrication, rhythm, viscosity, entanglement, as well as dexterity, navigation, sharpness -- or in other words -- art. How can resistance_adherence be addressed in those terms, that is, not in oppositions but in levels of intensity? How can an analysis of resistance_adherence lead to a better understanding of creativity, of autonomy? Indeed, how could tackling the notion of resistance from the point of view of adherence expose new tracks, new grips?

As an electronic periodical, .dpi also seeks proposals that make an interesting use of the Internet. Usually, essays are no longer than 1500-2000 words and columns, 800-1000 words. Other suggestions can also be acceptable. Selected authors will receive an honorarium for their contribution ($150 per selected article and $75 per selected
column).