Wednesday, November 18, 2009
David Vondle demos openFrameworks at dorkbot Chicago on November 19th 2009! Note: dorkbot is on the 19th this month, not the last thursday as usual.

Chicago-based interaction designer and hacker David Vondle will walk us through openFrameworks with an eye toward its use in computer vision, people tracking and multitouch, and also touch on electronic prototyping for digital experiences.

Openframeworks is a c++ library designed to assist the creative process by providing a simple and intuitive framework for experimentation.

The library is designed to work as a general purpose glue, and wraps together several commonly used libraries under a tidy interface: openGL for graphics, rtAudio for audio input and output, freeType for fonts,freeImage for image input and output, quicktime for video playing and sequence grabbing.

What is a "dorkbot"?! The idea of the international dorkbot network is "people doing strange things with electricity" and meeting in informal, friendly environments to discuss their projects. These projects could include hardware hacks, New Media Art projects, creative code, circuit bent musical instruments or wild DIY garage science!  ¶ 4:10 PM 0 Comments

Monday, November 09, 2009
Glitch: Investigations into the New Ecology of the Digital Age 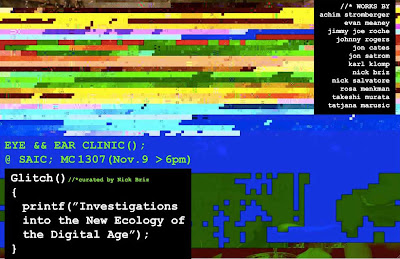 Glitch: Investigations into the New Ecology of the Digital Age
Curated by Nick Briz

"The genre [of glitch] has no recognizable center. No handle. It keeps moving, shape shifting. It blurs when it’s recognized and then only sharpens for brief periods. It is not a genre so much as a tactic for subversion that has become a fashion statement.” - Kim Cascone

Glitch art is aetheticized and fetishized technological [human] errors or anticipated accidents that can produce unintended [desired] results. It functions as a microcosm for new media art, forgrounding a critical relationship to the digital culture in which we find ourselves mired. This program initiates a conversation between glitch artists from all over the world with common concerns. These artists demonstrate the diversity of ways in which glitch can be used to address pertinent issues within digital culture, and in culture at large.

The artists in this program take the otherwise irritable and undesirable erroneous occurrences and malfunctions and embrace them as form. In their practice, as well as in many of their writings and research, errors and bugs are reshaped at times into elegant painterly digitalism, at others into a poetic and essayistic discourse, and often into spastic abrasive assaults of visual/audible noise. These works critically address issues of time, deconstruction, memory, and chance with regards to society’s relationship with technology. They attack the media systems that have been assimilated by popular culture and subvert the slick, sterile, and seemingly perfect surface of technologies propagated by special interests.

Glitch lends itself to pedagogy as much as it serves as a ruse to traditional modes of artistic instruction that codify random acts of creativity. Thus, glitch art is not exclusively technical: the most basic methods utilized by glitch artists can be easily taught, learnt and executed. Methods such as datamoshing and wordpad glitching have opened a potentially democratic space for conceptually and aesthetically exploring our amorphous identities in our new digital ecology.

As technology exponentially evolves and naturally occurring ‘glitches’ are being phased out, the natural aesthetics of digital technology are at risk of obsolescence. A mutual threat is currently being posed between the new technologies/upgrades which seek to nullify glitches and the glitches which attempt to expose these technologies/imposed systems. This program is an attempt to address this threat and generate dialogue about the critical importance and potential of glitch." - Nick Briz

The Eye & Ear Clinic is a free bi-weekly film series run by SAIC graduate students in Film, Video and New Media; Art History, Theory, and Criticism; and Arts Administration and Policy. Contact us at eyeandearclinic@gmail.com and be our friend on Facebook!  ¶ 9:04 AM 2 Comments 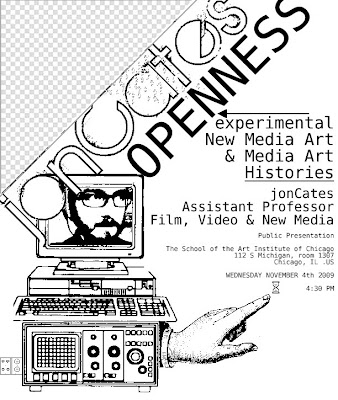 Public Presentation at The School of the Art Institute of Chicago
112 S Michigan, room 1307
Chicago, IL .US

jonCates presents on experimental New Media Art and Media Art Histories in this public presentation. jonCates makes, organizes and teaches experimental New Media Art. His projects have been presented internationally at various events in locations such as Beijing, Madrid and Mexico City; nationally in Chicago, New York and Boston and are widely distributed online. jonCates teaches in the New Media path of study of the Film, Video & New Media Department at The School of the Art Institute of Chicago. His research and writings are on Media Art Histories and related subjects. In 2007, he initiated the Phil Morton Memorial Research Archive to archive and freely distribute the Media Art work of Phil Morton and associated research. He writes on these topics for Furtherfield.org as well as in other online and offline publications.  ¶ 8:48 AM 0 Comments