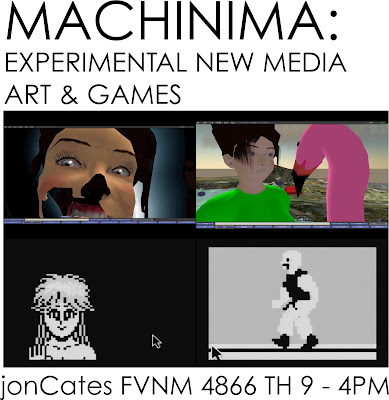 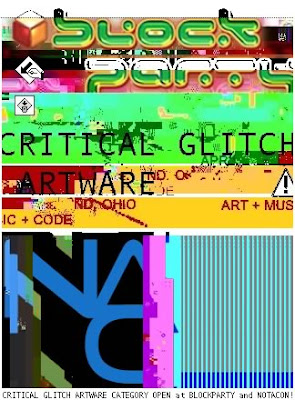 The criticalartware crew invites you to participate in the CRITICAL GLITCH ARTWARE CATEGORY OPEN at BLOCKPARTY and NOTACON 2010! Hosting the ARTWARE CATEGORY at BLOCKPARTY and NOTACON 2010, we invite submissions of Critical Glitch Artware to be exhibited and experienced in the context of the largest running North American demoparty! The ARTWARE CATEGORY will feature experimental works of Noise && New Media Art; Realtime Audio-Video Performances; Art Mods and Art Games as well as a Glitch Art screening program curated by Nick Briz!

CONTACT us to SUBMIT your PROJECTS to the CRITICAL GLITCH ARTWARE CATEGORY:

Blockparty is the largest running North American demoparty. Founded in 2007 by Jason Scott and Christian "RaD Man" Wirth, it has partnered with Notacon in Cleveland, Ohio:

Notacon (pronounced "not-a-con") is an art and technology conference which takes place annually in Cleveland, Ohio:

* the CRITICAL GLITCH ARTWARE CATEGORY was made possible in part by the Satromizer by Ben Syverson:

Jon Satrom (on whom the Satromizer is based) + Ben Syverson (the artware developer who created the Satromizer) are founding members of previous versions of criticalartware.  ¶ 5:06 PM 0 Comments

From a field of applicants from twelve countries from four continents, Mexican media artist, author, and researcher Fran Ilich Morales Muñozhas been awarded the first Leonardo Scholarship in the Media.Art.Histories MA program at the Department of Image Science at Danube University, Austria. The jury, consisting of Edward Shanken, jonCates and Oliver Grau selected Ilich from a highly competitive group of candidates based on his extraordinary accomplishments, intellectual sophistication, independent vision, and entrepreneurial spirit.
Ilich is Director of the Literature Department at the Centro Cultural de Tijuana, Founding Director of Possible worlds.org and Founding CEO of Spacebank. He was Co-founder and Moderator Nettime-Latino and has contributed essays to Wired News, Modem.txt, and Al Fin. His videogame artwork, "Banner" (with Blas Valdez) was exhibited at 01 San Jose (2009) and ARCO XX, Madrid (2001). His Internet soap opera, "Fea y Rebelde" was exhibited at Documenta 12, Kassel (2007). He was General Director and Curator of the Borderhack! festivals in 2001, 2002, and 2005.

=> LEONARDO SCHOLARSHIP FOR MEDIA ART HISTORIES
The scholarship is planned to answer the critical challenges of the 21st century, which require mobilization and cross-fertilization among the domains of art, science and technology by supporting the studies of a new researcher or artist.

Artists and programmers give new insights into the latest software, interface developments and their interdisciplinary and intercultural praxis. Keywords are: Strategies of Interaction & Interface Design, Social Software, Immersion & Emotion and Artistic Invention. Using online databases and other modern aids, knowledge of computer animation, netart, interactive, telematic and genetic art as well as the most recent reflections on nano art, augmented reality and wearables are introduced. Historical derivations that go far back into art and mediahistory are tied in intriguing ways to digital art. Important approaches and methods from Image Science, Media Archaeology and the History of Science & Technology will be discussed.
http://www.donau-uni.ac.at/mah

=>DANUBE UNIVERSITY KREMS - located in the UNESCO world heritage Wachau, 70km from Vienna, is the only public university in Europe specializing in advanced continuing education by offering low-residency degree programs for working professionals and life long learners. Our students & faculty members come from the USA, Italy, Canada, Syria, Austria, Mexico, & Hong Kong, among others. Without interrupting their career, students have the opportunity to learn through direct experience, social learning in small groups and contacts with labs and industry. They gain key qualifications for the contemporary art and media marketplace. The Center in Monastery Goettweig, where most MediaArtHistories courses take place, is housed in a 14th century building, remodeled to fit the needs of modern research in singular surroundings.

=>LEAF - The Leonardo Education and Art Forum promotes the advancement of artistic research andacademic scholarship at the intersections of art, science, and technology. Serving practitioners, scholars, and students who are members of the Leonardo community, LEAF provides a forum for collaboration and exchange with other scholarly communities, including the College Art Association of America (CAA), of which it is an affiliate society.