This introductory course focuses on screen-based new media works, their historical contexts, their specific aesthetics and theoretical concerns. Students gain an understanding of the emerging culture and historical antecedents of new media. Interactive, network and web-based technologies are introduced from the perspective of media art making. New media works are screened, discussed and demonstrated.
Prerequisite: FVNM 2000 or ARTTECH 2101 and Co-requisite FVNM 2101.

Systems, Codes & Spaces critically introduces the art of nonlinear media art via an understanding of its historical and theoretical trajectories. Students view and analyze structurally a variety of works in the mediums of video, installation, interactive media, new media and experimental 3D. Readings drawn from Jack Burnham, Pamela Lee, and Edward Shanken are discussed to assess the contemporary state of the field. Students must enroll in FVNM 2100 New Media: Crash Course simultaneously as a corequisite.
Prerequisite: FVNM 2000 or ARTTECH 2101, and Co-requisite FVNM 2100.

NOW OPEN for ENROLLMENT
and required for all students pursuing New Media Art
in Film, Video, New Media & Animation @ The School of the Art Institute of Chicago

CONTACT INSTRUCTORS for ENROLLMENT by permission of instructor
¶ 7:29 AM 1 Comments

Performing the Self, Past-Present-Future!
FVNMA 4225

CONTACT cauleen AT me DOT com
for questions and enrollment

Josephine Baker and Rhianna - Red Wine and French Fries - Professional Wrestling and Greek Gods. Outside of time, trends, zeitgeists and images actively sign and signify. Understanding and deploying their mechanisms are among the chief of the powers of artists. Determined Desires applies basic semiotic principles to the analysis of popular culture and politics and from the past and seeks analogous events of the present and speculates the future. Students will form small research groups to discover contemporary analogs for the popular cultural musings presented in Roland Barthes collected MYTHOLOGIES essays (1957). They will present their findings bi-weekly in class using audio-visual media to make their research explicit and to discuss the ways in which their own practices can exploit these strategies. Students will also develop and produce three to five projects using the materials of their choice and choose at least one of their pieces for revision as their final project.
¶ 9:18 AM 2 Comments 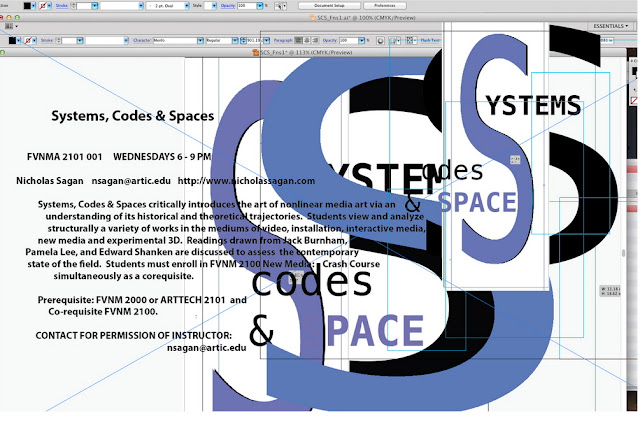 Systems, Codes & Spaces critically introduces the art of nonlinear Media Art and provides a historical and theoretical understanding of Digital Art forms. As Jack Burnham wrote in his 1968 essay Systems Esthetics, systems "may contain people, ideas, messages, atmospheric conditions, power sources, and so on". Close readings of systems and processes of interactive, digital and New Media Art will train students in the core aesthetic decisions, structures, strategies and demands of complex Media Art systems. This will involve screening works and analyzing these works through structural considerations of influential projects in the mediums of Video, Installation, Interactivity, New Media and Experimental 3D. Students read relevant Media Art historical and theoretical texts, discussing these texts in relation to projects shown in class. Writings drawn from Media Art Histories, such as those by Jack Burnham, Pamela Lee and Edward A. Shanken; and from nearby fields of research such as Cybernetics, will be mobilized as tools to understand nodal networks and ongoing relationships. Students should be taking Video: Crash Course and/or New Media: Crash Course simultaneously with this class.

CONTACT: Nicholas Sagan via nsagan AT saic DOT edu for enrollment by permission of instructor
¶ 9:47 AM 0 Comments

New-Media: Crash Course is the 1rst step into the New Media path of the Film, Video, New Media and Animation dept + Systems, Codes & Spaces is a new course designed to accompany yawl on that path:

Systems, Codes & Spaces critically introduces the art of nonlinear media art via an understanding of its historical and theoretical trajectories. Students view and analyze structurally a variety of works in the mediums of video, installation, interactive media, new media and experimental 3D. Readings drawn from Jack Burnham, Pamela Lee, and Edward Shanken are discussed to assess the contemporary state of the field.

New-Media: Crash Course is a studio course + Systems, Codes & Spaces is a course in which New Media Art projects are screened + discussed

currently these courses are still open + available. i strongly encourage you to take them + / or recommend them to your friends who may be interested in pursuing New Media Art @ SAIC

check them out + let any of us know if yawl have any questions about these New Media Art courses!

Lindsay Howard, contemporary New Media Art curator, is the Director of 319 SCHOLES in NYC. 319 SCHOLES is one of the most important young spaces for New Media Art now in NYC. Her recent curatorial work includes the exhibition DUMP IRL, the AWARENESS OF EVERYTHING (part of the international SPEED SHOW series/platform) and Wallpapers, an exhibition by New Media Artists Nicolas Sassoon and Sara Ludy (a recent alum of FVNMA and SAIC). Howard will discuss these and other curatorial experiences, giving examples of recent projects in order to open a conversation on curating New Media Art:


The Eye & Ear Clinic is made possible by the Dean's Office, Student Associations and the Department of
Film, Video, New Media and Animation: